Cato The Younger reading the Phaedo Before Killing Himself at The Louvre, Paris 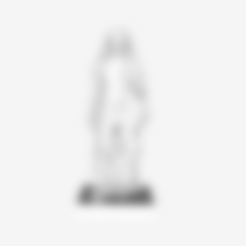 This white carrara marble sculpture by Jean-Baptiste Roman was carved and finished in Paris from 1792-1835, commissioned in 1832 to Roman for the heart of the Louvre. It was completed by Francois Rude in 1840 after the death of his friend.

Marcus Porcius Cato Uticensis commonly known as Cato the Younger (Cato Minor) to distinguish him from his great-grandfather (Cato the Elder), was a politician and statesman in the late Roman Republic, and a follower of the Stoic philosophy. A noted orator, he is remembered for his stubbornness and tenacity (especially in his lengthy conflict with Julius Caesar), as well as his immunity to bribes, his moral integrity, and his famous distaste for the ubiquitous corruption of the period.

This sculpture depicts Cato The Younger at the point where he is about to take his own life whilst reading the Phaedo, a dialogue of Plato which details the death of Socrates.