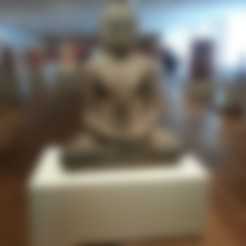 This meditating Buddha comes from the coastal town of Nagapattinam in southern India, which was, as a result of settlers from Srivijaya (Indonesia), one of the few places where Buddhism was still flourishing in the twelfth century. The Buddhaâwith his elongated earlobes, the wheel marks on his palms, the urna between his brows, and the cranial protuberance covered with snail-shell curlsâis seated in the posture of meditation, with his hands resting on his lap (dhyanamudra), wearing a seemingly diaphanous monastic garment. As in other images from Nagapattinam, a flame emerges out of the Buddhaâs cranial protuberance, probably signifying wisdom. This monumental sculpture carved out of granite originally would have graced a monastic site at Nagapattinam, which is also well known for its Buddhist bronzes. The Tamil inscription covering its back is now no longer legible.