Athena of Velletri at the Louvre, Paris 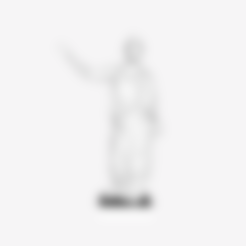 Many ancient copies of the bronze have been found (and the Baiae find suggests industrial-scale production of them), but the most famous is the 3.05 m (10 ft) high example found in the ruins of a Roman villa in a vineyard near Velletri in 1797. Upon rediscovery, it was purchased by Vincenzo Pacetti, who added the peak of the helmet, the straight forearm, the hands, the feet, the snakes, and a section of the cloak, and polished the overall surface. He then sold it to the French Directory, which transported it to Rome, where it was soon seized by Neapolitan armies when they briefly held the city from November to December 1798 during the opening stages of the War of the Second Coalition. France then regained it in the Treaty of Florence (28 March 1801), and it was displayed at the Louvre from December 1803 onwards.