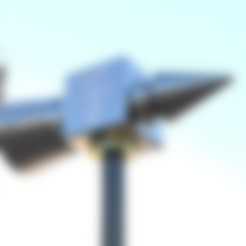 This was designed for a friend, he is doing commission printing, assembly, painting, and finishing. If you are interested, please contact him at madcowmisha@cox.net

Aegis-Fang
"Aegis-fang (derived from the mythical shield Aegis) is the weapon of Wulfgar. It was forged for him by his adoptive father Bruenor Battlehammer while he was in servitude of the dwarf king. It was Bruenor's finest creation. Its head is made from pure Mithril with a diamond coating magically adhered during the forging and an adamantite shaft. Its head is engraved with the magical inscriptions of Clangeddin, the dwarven god of battle, as well as the symbols of Moradin, the dwarven god of creation, which covers the symbol of Dumathoin, "keeper of secrets under the mountain".

It is a large and heavy, perfectly balanced Dwarven war hammer +5. When thrown at any giant or giant-class monster, that monster is struck dead (although a powerful Frost Giant named Biggrin was able to take the hit, though it gashed the side of his head and dropped the fifteen-foot-tall giant to the floor). Any person not standing over 6'5" and with considerable strength will have a hard time wielding it properly, though even someone of lesser strength can feel the flawless balance. It is magically attuned to Wulfgar and will reappear in his hand upon command.

Wulfgar has been trained extensively by Drizzt Do'Urden with this weapon. He has used it in two battles against dragons, a shadow dragon named Shimmergloom and a white dragon named Icingdeath, both times ending in victory. He also used it in a battle beside Drizzt Do'Urden and Bruenor Battlehammer against the balor, Errtu, again ending in victory for the companions." -Wikipedia

The 2 foot rod is the handle of the hammer. You can either use a 3/4" wooden dowel, or you can go full out and use a metal rod or pipe

The two shorter dowels are for attaching Hammer.stl and Pick.stl onto the sides of Main_Body.stl

These can be glued in place with superglue. The two shorter dowels are for attaching Hammer.stl and Pick.stl onto the sides of Main_Body.stl

Hi, my name is Henry and I design 3d models for low prices. In return ask that you please consider leaving a small tip via the link below if you like my work.

All my designs come from suggestions, so if you have a suggestion, please reach out to me at henryqiu19@gmail.com and I will respond as soon as possible. If I like it, I may even do it for free :)