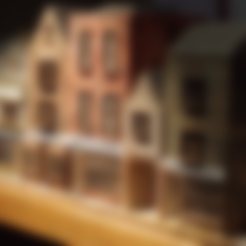 Continuing with the Ripper's London series, these new buildings are designed as a parade of shops in Victorian London's East End. They come in five separate buildings which can be re-arranged to meet your own tastes and needs, or of course used individually (except part two which is more of an extension building above an alleyway. All those shown with signs are equipped with blank sign boards for you to choose your own retailers. Some of the buildings have archways to allow figures through to the seedy backways and alleyways of the city, where I'm sure nothing illegal ever happened (ever...)

I've currently marked the files as work in progress because some idiot forgot to equip the buildings with chimneys, and only noticed it when he was painting them ! If there are any files which seem to be missing please let me know as 5 buildings do create a fair number of files...

The Smiths and Co shop is not supposed to represent a well-known UK newsagent chain. This shop belongs to Arthur Smith and his son Reg, who are local 'financial advisors' (money lenders)
The shop on the far left on the main photo is the undertakers which appears elsewhere.

I originally made this and the accompanying range of 28mm buildings to accompany the "In Her Majesty's Name" set of wargaming rules by Craig Cartmell and Charles Murton, published by Osprey Wargames, and because I've been watching "Ripper Street" on that new-fangled television apparatus. I've now got carried away with my own 'Rat the Ripper' theme! The buildings should suit any variety of Victorian building usage that needs a taste of the old East End, and many of the buildings will still be alive and kicking in 'Station Roads' up and down the country and so useful for train scenery building, and various steampunk scenarios and games

Undercoated in gesso
painted in acrylics
matt varnish except for windows

How I Designed This
Design