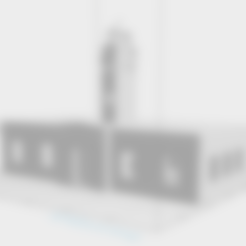 The design features a hollowed out tower and orifice on the floor that allows for a 9volt battery to be inserted in order to light it with diodes.

On September 15, 1889, the Government of Spain, which then controlled the island, activated the newly completed lighthouse on Punta Borinquen that had cost 30,870 pesos and was located sixty-five miles west of San Juan. The structure consisted of a thirteen-room, one-story dwelling, designed to house two keepers, that was centered around an octagonal tower. Both the tower and dwelling were built with stone and brick and were painted red with white trim. A bracketed cornice, built in a Moorish style that contrasted sharply with the structure’s otherwise simple neo-classic lines, supported the walkway that encircled the lantern room.
A 7.5-magnitude earthquake struck Puerto Rico at 10:14 a.m. on October 11, 1918.
Due to its low-lying position on the shore, Point Borinquen Lighthouse, which was already threatened by erosion, was battered by the giant wave as it spread inland. The structure, however, received most of its damage from the earthquake. The tower was shattered by the shock and likely would have fallen if not for the support of the iron stairway.
https://www.lighthousefriends.com/light.asp?ID=1162